BERLIN — The German police on Tuesday arrested three men and said they were searching for two others in connection with the theft of gold, diamonds and precious stones from three highly prized collections of Baroque royal jewels in a museum in Dresden last year.

Hundreds of officers and special forces from across the country descended on a Berlin neighborhood before dawn to search 10 homes and eight other locations, including garages and vehicles, in search of the valuables, the authorities in Dresden, an eastern German city, said.

“The measures today are focused on the search for the stolen art treasures and possible evidence, such as storage media, clothing and tools,” the Dresden police and prosecutors said in a joint statement.

The predawn break-in at the Jewel Room, one of 10 rooms in the Royal Palace museum known as the Grünes Gewölbe, or Green Vault, made headlines around the world because of the importance of the stolen pieces and the circumstances surrounding the crime.

The pieces were said to have “immeasurable” cultural and historical value and the theft raised questions about security in German museums after another spectacular break-in at a Berlin museum two years earlier.

In the Dresden heist, the thieves used an ax to break the security glass of the cases holding the jewels and stole 11 pieces, including three treasures dating to the 18th-century nobleman August the Strong, prince-elector of Saxony and little-loved ruler of Lithuania and Poland. Among the trove were sets known as the “Diamond Rose” and “Queens’ Jewelry,” along with parts of two other collections and several individual items.

Dresden officials identified the three men arrested on Tuesday only as German citizens, two age 23 and one age 26. A search warrant issued for two other suspects, Abdul Majed Remmo and Mohamed Remmo, both 21. 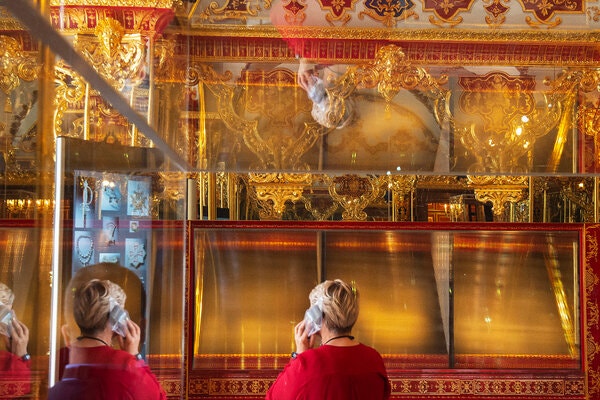 The objects in the Green Vault are one of the world’s most intact collections of Baroque jewels. The building was heavily damaged during World War II, but it was painstakingly rebuilt after German reunification and reopened to the public in 2006. The rooms hold a collection of 3,000 individual objects.

The stolen jewels were not insured and museum officials would not give a figure for their value, insisting that their worth lay in their historical and cultural significance as part of a complete royal collection.

Because they are unique, the pieces could not be hawked on the open market, leading to fears that they would be broken down, with the gems re-cut and the gold melted.