The fourth season of Netflix’s royal show “The Crown” is dense with rivalry, intrigue and — this being the era of Diana, Princess of Wales — hair spray.

Early in the season, we see a teenage Diana Spencer (Emma Corrin) being courted by Prince Charles (Josh O’Connor), and the 10 episodes take us through the 1980s to the brink of the breakdown of the couple’s marriage. That period also sees the rise and decline of Prime Minister Margaret Thatcher, whom Gillian Anderson portrays as a ruthless operator brought down by her inability to compromise. And then there’s Queen Elizabeth II (Olivia Colman), the show’s driving character. As Prince Philip says in the season finale, “She’s the oxygen we all breathe.”

Much of the show’s dialogue is fictional, but many of the events are real: the war in the Falklands, the Thatcher government, the souring of a royal marriage and Diana’s first steps toward independence.

Here’s a look at how those stories were reported at the time. You can find more in the TimesMachine archive browser. (Warning: This feature contains spoilers for all 10 episodes of Season 4.) 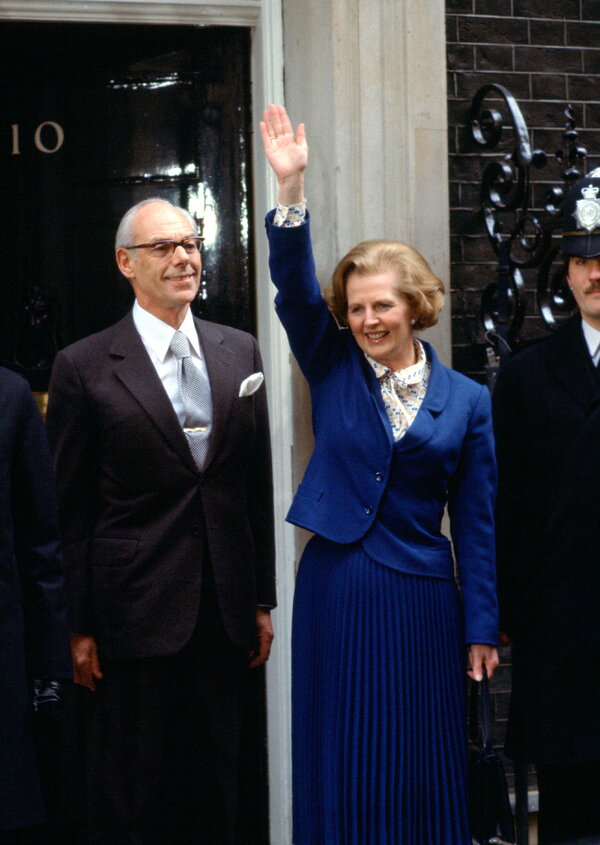 The front page New York Times article announcing Thatcher’s victory reminded readers that she would be Europe’s first female prime minister, while also noting that her “voice and her manner reminded many voters of unfondly remembered schoolmarms,” a hint at the persistent sexism that would follow Thatcher and other female leaders.

An analysis by The Times’s London bureau chief in the week before the election described Thatcher as “resolute, a little preachy, devoted to the essentially middle-class notion of ‘responsibility,’ and convinced in the deepest part of her being that only individuals, not governments, can achieve it.”

Episode 1 also shows the assassination of Earl Mountbatten of Burma, Prince Charles’s uncle, whose fishing boat was blown up by Irish Republican Army paramilitaries. “The explosion this morning reverberated like thunder through this peaceful little seaside village” The Times reported from Mullaghmore, Ireland. “A witness who saw it from the shore said, ‘The boat was there one minute and the next minute it was like a lot of matchsticks floating on the water.’”

The second episode centers on two visits to Balmoral, a British royal estate in Scotland. The title refers to the idea that an ability to cope with the elaborate traditions, games and bad heating at Balmoral is the key to acceptance from the royal family. Prime ministers traditionally spend a weekend at Balmoral: In his memoir, Tony Blair called one of his visits “a vivid combination of the intriguing, the surreal and the utterly freaky.”

Thatcher fails miserably. “None of the other prime ministers left early,” says Princess Margaret (Helena Bonham Carter), as Thatcher’s car pulls away. But where Thatcher is stiff, unhappy, and bored in the countryside, Diana is charming.

Now that Charles is in his 30s, Season 4 opens with the queen and her circle increasingly concerned with finding him a wife. In Diana, they believe they’ve found their girl. Charles first met Diana, who was then 16, when he was courting her older sister, Sarah. In later years, Diana would say Charles was initially all over her “like a bad rash”; in “The Crown,” she is smitten, but Charles — still in love with his long-term girlfriend, Camilla Parker Bowles — is less enthusiastic about the marriage. Diana’s Balmoral visit was “a triumph,” he says bitterly to Camilla on the phone. “They want me to marry her.” 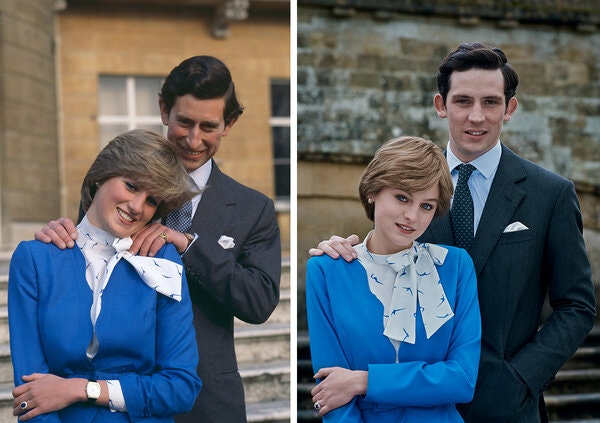 At the beginning of the third episode, Prince Charles calls his mother to say he has proposed. “Did you kneel?” she asks excitedly. “I thought, in terms of rank, the Prince of Wales only ever knelt before the sovereign,” he replies, a sign, if we still needed it, that this “fairy tale” romance will feature more locked towers than knights in shining armor.

The show recreates their engagement interview from 1981. As in real life, when the interviewer comments on how “in love” they seem, Charles gives an unnerving reply: “Whatever ‘in love’ means.” Diana would later call the interview “ghastly,” saying his answer “absolutely traumatized me.”

As the New York Times article about their engagement noted, Charles subsequently left on a long trip to Australia. “The Crown” portrays Diana as a lonely teenager, lost in her splendid new surroundings.

The episode also shows the first signs of Diana’s bulimia. In transcripts of tapes published by the royal biographer Andrew Morton in 1997, the year of her death, Diana said, “The bulimia started the week after we got engaged. My husband put his hand on my waistline and said ‘Oh, a bit chubby here, aren’t we?’ and that triggered off something in me. And the Camilla thing — I was desperate, desperate.” 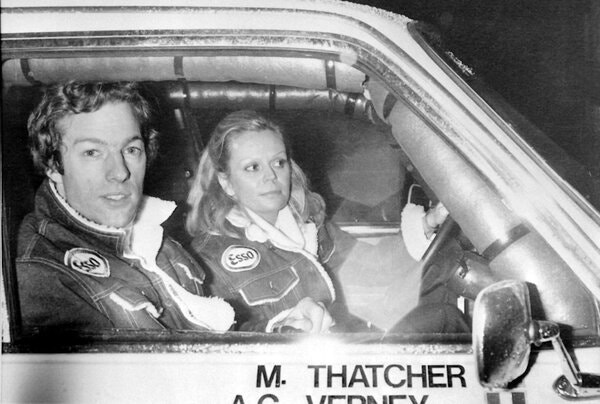 In the fourth episode, the prime minister breaks down in front of the queen during their weekly meeting. Her son, Mark, had gone missing in the Sahara while driving in the Paris-Dakar Rally. The Times reported at the time, “At a public appearance in London this afternoon, Prime Minister Thatcher broke into tears when asked about her son, and said: ‘I’m sorry, there is no news. I am very concerned.’”

When he was finally rescued, he was in for a family scolding, as The Times reported in an article headlined, “A Chastening Return Home for Mark Thatcher.”

Elsewhere, conflict begins to escalate in the Falklands, a chain of islands in the southern Atlantic. The show implies that Thatcher’s fierce response to the Argentine invasion of the archipelago was driven by her anxiety over her son: “Our people, far from home, their lives are in danger!” she shouts at an aide.

In reality, Mark Thatcher disappeared for six days in January 1982; Argentine scrap metal workers did not raise their flag on the Falklands until March.

In the season’s fifth episode, the queen wakes up to find a man in her bedroom at Buckingham Palace. The real-life intruder was Michael Fagan, who, according to a 1982 Timesarticle, “sat on the bed six feet from the Queen, told her he loved her and threatened to kill himself with a broken piece of glass.”

“The Crown” portrays Fagan as a victim of Thatcherite Britain: standing in line for unemployment money, taking odd jobs and finally having his children removed by the state. When his local representative sarcastically suggests he take up his grievances with the queen, Fagan begins experimenting with the idea of breaking into Buckingham Palace. The real Fagan, in contrast, told the British newspaper The Independent in 2012, “I don’t know why I did it, something just got into my head,” and said it might have been the aftereffects of eating magic mushrooms.

The New York Times reported that the queen had talked to Fagan about her children to distract him while she waited for help. In the episode, they do not speak about her family, and Fagan instead makes a lucid case for political change, begging the queen to listen to him as he tries to explain “what’s going on in the country” under Thatcher.

The sixth episode centers on Charles and Diana’s much-hyped tour of Australia in 1983. The trip was not covered in The Times, but the Australian news media scrutinized their every move.

In “The Crown,” Diana is angry at being forced to leave the young Prince William for part of the tour. At the time, the Australian newspaper The Age reported that, on arrival, she “seemed uneasy, even glum, and looked at the tarmac with downcast eyes throughout much of the brief airport picture session.” There was speculation that Diana was sad to leave the baby, the reporter wrote, but “whatever the reason, Princess Diana had to work mightily to produce for the photographers the smile of a proud and happy young mother.”

Over the course of the episode, Diana and Charles reconnect and turn the tour into a success, before her popularity makes him jealous and the relationship sours again. Diana’s clothes were rapturously photographed throughout the tour (and still inspire slide shows), and the show recreates many of the outfits in careful detail.

The seventh episode centers on the glamorous, lonely, chain-smoking Princess Margaret. At the beginning of the episode, she undergoes lung surgery. In 2002, the British daily The Telegraph wrote of her habit: “She smoked strong Chesterfield cigarettes, up to 60 a day at times,” noting that when her father King George VI contracted lung cancer in 1951, “the 22-year-old princess reacted by smoking even more heavily than before.”

Margaret is also suffering from mental health issues, and in the course of treatment she discovers Katherine and Nerissa Bowes-Lyon, two apparently neglected relatives with mental disabilities who are living at the Royal Earlswood Hospital.

“Yes, I remember hearing about Katherine and Nerissa, and their terrible problems. But they’re long dead,” the queen says when Margaret comes to her in the show. “It’s my understanding, they’re both very much alive,” Margaret responds. They check “Burke’s Peerage,” a guide to the British aristocracy, which had both sisters falsely listed as long dead. When the existence of the sisters was revealed in 1987, there was much speculation in the British tabloid press about a possible royal cover-up.

In July 1986, The Sunday Times of London ran a sensational article with the headline, “Queen Dismayed by ‘Uncaring’ Thatcher.” It suggested that the famously apolitical queen was secretly furious with the prime minister for, among other things, not joining other Commonwealth nations in imposing sanctions on apartheid South Africa. The eighth episode focuses on this “unseemly skirmish,” as The Washington Post called it at the time.

Buckingham Palace strenuously denied the article, but in the show, the queen is directly involved in promoting it. Her press secretary, Michael Shea, reluctantly leaks her views and later is forced to take the heat for the article and resign. In reality, Shea did acknowledge speaking to the journalist, but he said that his words had been taken out of context. As in the show, Shea went on to work as a pulp novelist.

Charles Moore’s biography of Thatcher says that the queen later apologized to the prime minister for the article. 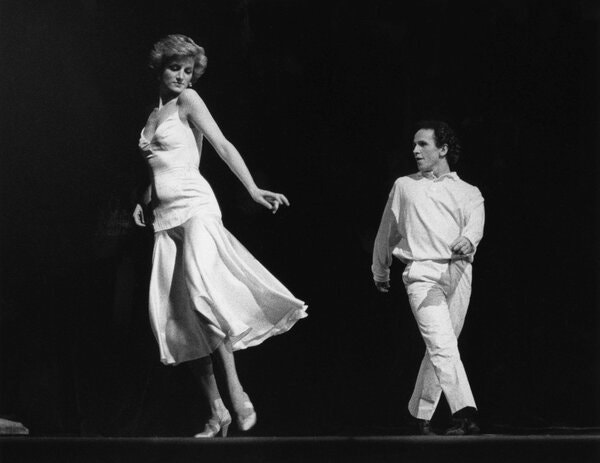 In 1985, Diana surprised Charles for his birthday by dancing onstage to Billy Joel’s “Uptown Girl” at the Royal Opera House. “The audience gasped when Diana appeared, as if they’d all taken one huge breath,” her dance partner, Wayne Sleep, remembered in the British newspaper The Guardian in 2017. “At one point, I pirouetted and she pushed me down; then I carried her across the stage. I remember thinking, ‘Don’t drop the future queen of England.’”

We do not know how Charles really felt about the performance, but in the episode, he is horrified, calling it a “grotesque, mortifying display.” At the time, rumors were already circulating about their marriage. The same year, The New York Times said there were “rather unkind” reports “that the royal couple argues a lot, that he is eccentric and henpecked, and that she is obsessed with clothes and diet.”

The BBC called it “the resignation that toppled Thatcher.” In 1990, Geoffrey Howe, Thatcher’s longest-serving cabinet member, stepped down with a speech encouraging others to break ranks with the prime minister.

The Times obituary for Howe in 2015 described him as “a roly-poly avuncular man with shaggy white hair” and “little charisma or flair for public speaking.” But Howe’s resignation did huge damage to Thatcher, and she was out within weeks.

The episode also shows a solo trip to New York that Diana took in 1989, which included a visit to the pediatric AIDS unit of Harlem Hospital. In real life, Diana changed public attitudes toward the disease, touching AIDS patients at a time when many people were afraid to do so. In the Harlem hospital, she hugged a little boy who had the illness, as she does in the show.

A Times article about the trip quoted Dr. Margaret Heagarty, pediatric director at the hospital, who told Diana, “Your presence here and in Great Britain has shown that folks with this disease can be hugged, can be cared for.”