Caroline Chou, 19, pins a green screen to the goldenrod walls of her childhood bedroom in San José, Calif. She’s already changed into her uniform: a white button-down shirt, pleated skirt and green striped tie. A wand and heavy tome lie on the bed, in case she needs props.

Chou, who would normally be on campus at the University of California, Los Angeles, has adjusted to a new normal during the coronavirus pandemic. She spends her weeks clicking between online college courses and two remote, part-time jobs.

And on the weekends, she slips away to Hogwarts. 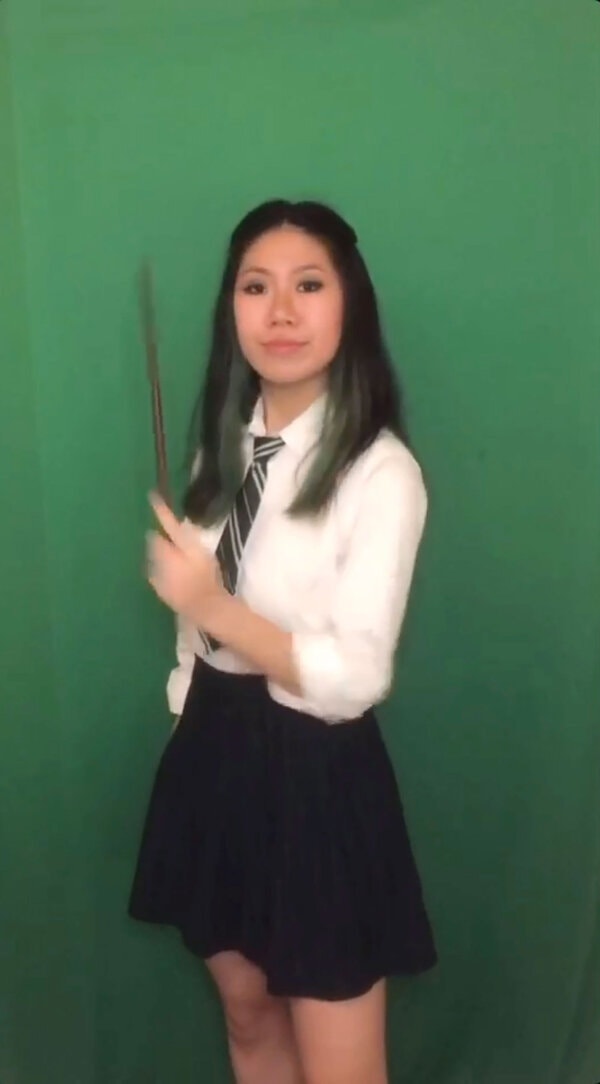 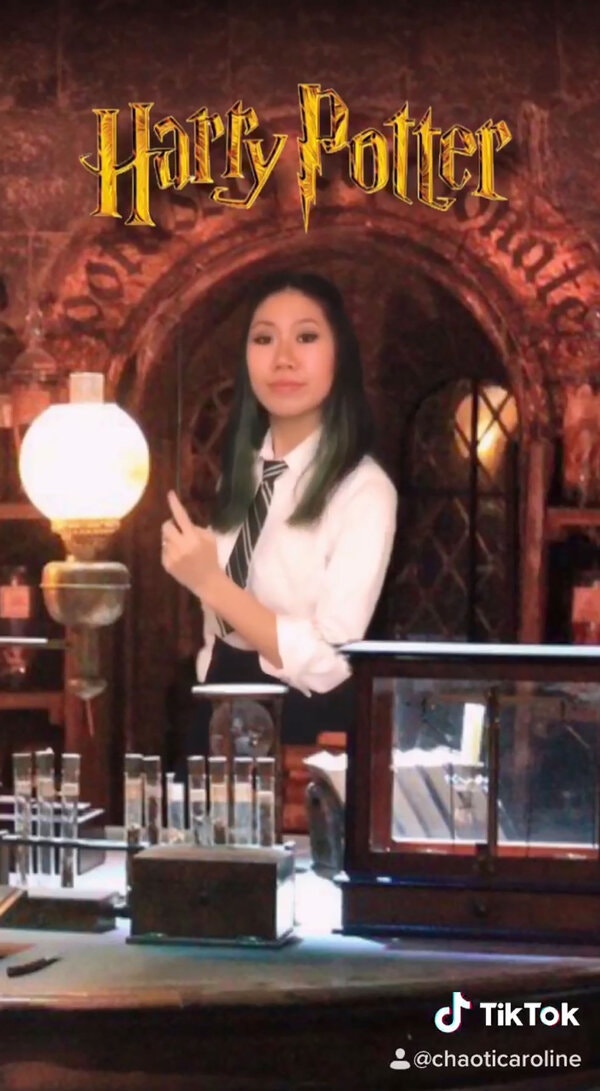 Chou is one of many Gen Zers who has found her niche on Harry Potter TikTok, a corner of the app devoted to remixing, reliving and affectionately roasting the perennially popular franchise. Harry Potter TikTokers produce and devour their own fancam videos, memes, dances and trends. But millions of views go to videos like Chou’s, where fans — predominately girls and women — are editing themselves into the movies.

These edits frequently give creators a chance to romance their favorite characters, à la Wattpad fan fiction. With strategic cuts or more advanced editing, users can star as “Harry Potter” protagonists, whose love interests include everyone from the Weasley twins to Luna Lovegood to — overwhelmingly — Draco Malfoy.

Self-insert videos also offer young fans, many of whom grew up with Harry Potter, comfort and escapism during the pandemic. After online classes, they can go to a potions lesson. Separated from their usual social lives, they can befriend other Potterheads on TikTok. And queer people and people of color, who have been notably marginalized in the Harry Potter universe, can finally become protagonists in the stories they’ve long adored.

Setup and costuming are just two steps in Chou’s production. As she builds her universe over a Zoom interview, the Slytherin scours YouTube for clips from the “Harry Potter” movies, choreographs her scenes and films herself. Later, she’ll use Adobe Premiere Pro to bring herself out of her green-screened bedroom and onto the Hogwarts campus through keying, masking and color correction.

The end result is a 12-second montage of her admiring five of the “Harry Potter” boys. The whole process takes about two hours, but some of her videos — which can be as long as 60 seconds — have taken up to 10.

Marjorie Law, a 22-year-old Slytherin in Santa Clarita, Calif., is similarly meticulous. In October, she spent about 10 hours editing herself into Harry’s place in an early “Half-Blood Prince” scene, invisibility cloak and all.

For Chou and Law, Harry Potter edits double as wish fulfillment and professional practice. Chou, a film student who wants to be a director, got into TikTok after one of her professors encouraged her to stay creative during quarantine. Law studies digital media at Otis College of Art and Design in Los Angeles, and hopes to work in visual effects. Like most Harry Potter fans, they both grew up wishing they could attend Hogwarts.

“Now that I’m older, with the magic of technology, I can see myself there,” Law said.

“It’s a great opportunity for any person of color,” said Belle Miranda, a 19-year-old TikToker and one of Law’s nearly 80,000 followers. “I can write my own spinoff: What if a Latina Ravenclaw was inserted in the series?”

Emelee Chanthabury, 22, received multiple comments comparing her to Cho Chang, the only notable Asian character in the “Harry Potter” series, when she first started editing herself into the movies. Chanthabury, like Cho Chang, is a Ravenclaw who fancies Cedric Diggory. But the two look nothing alike: Chang is of Chinese descent, whereas Chanthabury is Laotian and white.

The experience has introduced Chanthabury to a community of fans like her. “When I go through my followers and my comments, it’s all Asian women, and it brings me so much joy,” she said.

This is one of Harry Potter TikTok’s other major draws: Like the message boards and chat rooms of yore, fans are using the app to meet and befriend fellow Potterheads. They communicate in group chats on Instagram, Snapchat and by text messages. Sometimes, they even collaborate on videos together. Law uses Zoom with her Harry Potter friends — the self-christened “Hogwarts Cheeto Girls” — regularly, and just met one in person for the first time. Chou recently edited herself and Melina Spahn, a 20-year-old Hufflepuff from Germany, into a scene from “Order of the Phoenix.”

“The fact that you live across the ocean and here we are fighting Death Eaters together,” Spahn commented on the post. “I love this.” 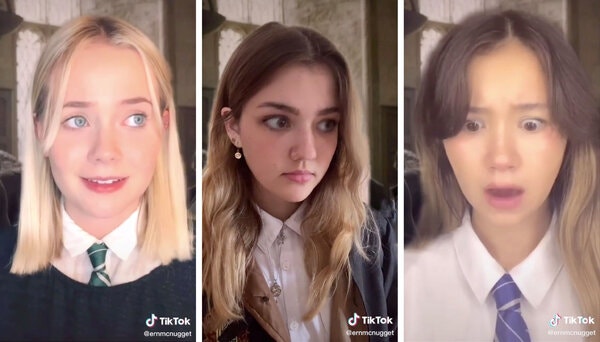 Erin McDonald, 19, has relied heavily on these friendships in the last few months. Her parents moved from her home state of Virginia to San Luis Obispo, Calif., during her first semester of college. So when quarantine forced McDonald to move back home, she found herself across the country from her childhood friends.

McDonald found solace in TikTok, quickly gaining more than 120,000 followers for her videos romancing the Quidditch captain Oliver Wood. She and Chanthabury have an ongoing video series with their friend, Mia Oberholzer, 19, a Slytherin from Saskatoon, Saskatchewan. Another of McDonald’s TikTok friend groups, the “Harry Potheads,” is comprised mostly of younger teenagers. They call her Papa Ernie, and the group meets on Zoom every night.

Ever the Hufflepuff, McDonald said her favorite thing about Harry Potter TikTok was its overwhelming positivity. When she found herself unwittingly at the center of some fandom drama in October, the issue was resolved with no hard feelings. On another account, she posts “Harry Potter” scene edits in which various characters encourage her eating disorder recovery.

As a bisexual woman, McDonald said she also wanted to create more space for fans like her, especially given what some see as the “Harry Potter” author J.K. Rowling’s feeble attempts at gay representation. Rowling’s recent comments about transgender people have likewise spurred legions of fans to make “Harry Potter” their own.

While other fans thirsted over Draco Malfoy, McDonald was one of the first users to edit herself into a relationship with Hermione Granger. Multiple creators followed suit, including Beth McAlpine, a 16-year-old Hufflepuff from London.

“It’s like fixing a part of your childhood that was missing,” McAlpine said.

The pull of childhood comforts is especially strong for young Americans today, with coronavirus cases climbing, a contentious presidential election just barely in the rearview mirror and an upcoming holiday season mired in travel restrictions. In the face of overwhelming uncertainty, Gen Z is fleeing our world for the safety of Harry Potter’s. Of all the videos Oberholzer has made for her over 226,000 followers, the most-viewed shows her spending Christmas with the Weasleys.

Harry Potter TikTok is also closely linked to the “shifting” community on the app, where users try different techniques like meditation or visualization to enter a semiconscious state similar to lucid dreaming. Shifters will write scripts dictating what they want to do on their liminal adventures. At Hogwarts, their goals are almost universally lighthearted: whether making friends, finding love or doing class work, it’s a privilege just to be there.

“It’s currently 9 a.m. and I just woke up from a full five months at Hogwarts,” one shifting video claims. “Take me back home, I hate it here.”

Chou wants to shift to Hogwarts, but she hasn’t been able to make it happen yet. Editing herself into the movies will have to do for now.

“Seeing myself actually in it — like physically, visibly in it — is so surreal,” Chou said, after she was finished shooting for the day. She sat at her desk, a copy of “Harry Potter and the Chamber of Secrets” to her right.

“For those 30 seconds, I can pretend I’m there, and not in this world that is on the verge of collapse,” she added.

‘The Crown’: The History Behind Season 4 on Netflix